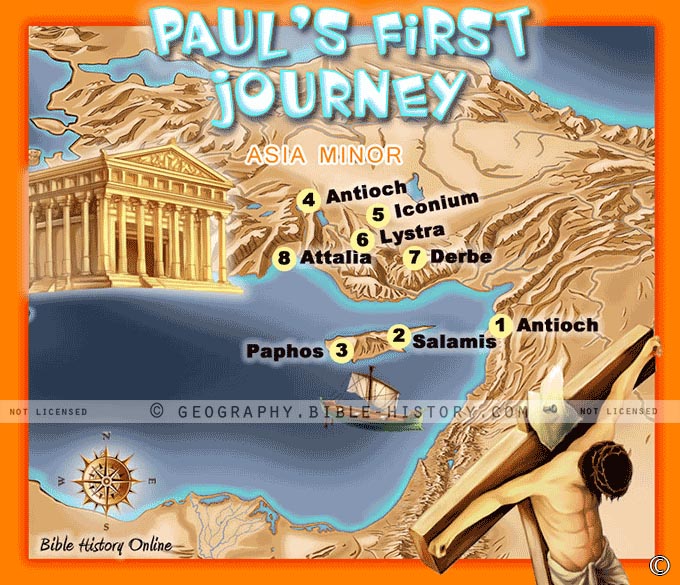 This map shows all of the main cities where Paul and Barnabas traveled for their first missionary journey! Their journey first began in the city of Antioch of Syria where they were told by the Holy Spirit to go and spread the good news of Jesus. Paul and Barnabas obeyed God and traveled on a boat to the island of Cyprus where they docked in the town of Salamis. After preaching the word of God in Jewish temples, they traveled from town to town across the entire island until they reached Paphos.

At the city Paphos, Paul punished an evil man for being a false prophet and for lying about Jesus to the local governor. After Paul punished the evil man, the governor learned about the truth of Jesus and became a Christian!

They left by ship to cross the Mediterranean Sea toward Asia Minor and would travel the rest of their journey on foot. Everywhere Paul and Barnabas went, they shared the news of Jesus and started many churches! Not only did they share about God, but God also allowed them to perform a miracle at Lystra where Paul healed a man with crippled feet and made him able to walk again! After Paul's first missionary journey ended, he would have two more missionary trips and travel to many more cities to tell everyone about Jesus.

Paul the Apostle. When Jesus rose again He appeared to his disciples many times and the last thing he told them before he ascended into heaven was to go into the all the world and to preach the gospel, the good news that Jesus has risen from the dead and that God is offering salvation to anyone who will believe in him. The command of Jesus was very clear, and even when the Holy Spirit  came and empowered the disciples they would not leave the land of Israel. They preached the gospel but they did not travel very far. But when Paul the apostle received his revelation from Jesus, he was determined to follow the command of Jesus and to go into all the world.

The First Church Planting Mission. Around the year 48 A.D. the apostle Paul set sail from Antioch into uncharted territory, he had two men with him, Barnabas and Mark. His mission was to tell people about Jesus beginning with the Jews first and then the Gentiles. He wanted to plant churches so that people would learn the word of God, and gather together as Christians to worship and minister the word.

Cyprus. They landed at the large island of Cyprus which was the home of Barnabas. They came to the port at Salamis which was a very Roman city with a huge marketplace. Later they went to Paphos where the people worshipped Aphrodite, the goddess of love. People came there from around the Roman Empire. Paul was invited by the Roman governor to speak but a false prophet opposed them. Paul rebuked him and his fearlessness made him a great leader.

Asia Minor. Later they set sail from Cyprus over to Asia Minor and journeyed on land for about 100 miles to Antioch of Pisidia which was along the major trade route from Ephesus. By this time mark left to back to Jerusalem. Paul taught a great message to the Jews about God's plan of redemption starting with Abraham. When the message was received by gentiles (non-jews) the Jews got jealous and opposed Paul and Barnabas, so they left Antioch, but the Word of God was spreading fast everywhere.

Appointing Elders. God was doing great things and the Word was spreading rapidly, but the Jews were jealous, and they went ahead of Paul and Barnabas and tried to incite a riot. The Lord was working many miracles through the apostles, and churches were planted. Paul and Barnabas appointed elders in every church in their journey. They ministered for nearly two years and traveled about 1250 miles.

The Holy Spirit. Paul and Barnabas were not alone, the Holy Spirit was with them confirming His Word with signs and wonders. The apostles planted the seed and the Lord caused the increase.

The study of Paul is very important in the study of the Bible, let's pray:

Dear Jesus, we thank you for the apostle Paul and Barnabas, two men who traveled hundreds of miles to share the good news about Jesus Christ in a world that had no idea. Yet it was all because of you that people received the good news. You love your people so much, and we thank you that you invite us to be part of your work. Help us to realize how important it is to be your hands and feet in this lost world. In Jesus name? Amen!