<
The Land of Babylon 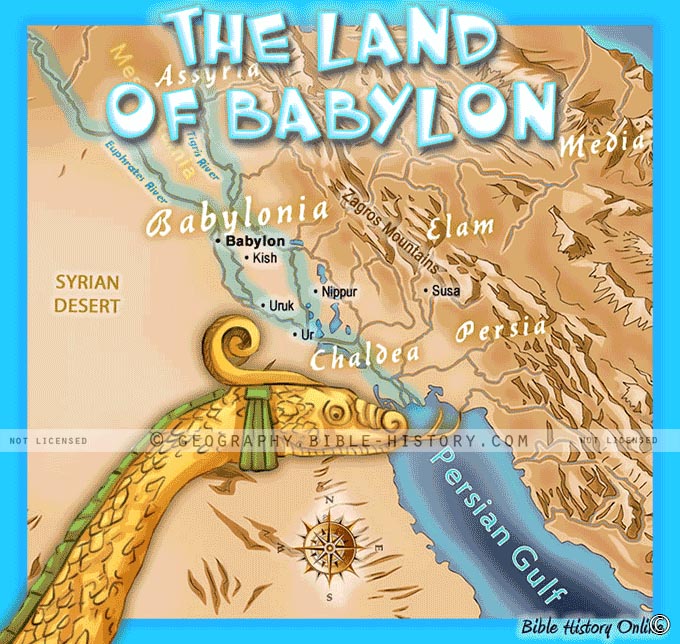 Psalm 137:1 "By the rivers of Babylon, There we sat down, yea, we wept When we remembered Zion." 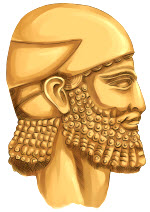 Babylon in Bible History. God is in control of history, and the Bible reveals that Babylon was the city of idolatry. Babylon was where all false religion started, at the tower of Babel. Babylon is the Greek name of the city of Babel which means "the gate of God," which in ancient Sumerian means the gate of life. God had to come down and destroy the Tower of Babel and change men's languages so that they would be forced to leave that place and scatter throughout the earth. Later when the remaining two tribes of Israel called the "Southern Kingdom of Judah" had fallen so deep into idolatry that they could not be restored, God raised up a man named Nebuchadnezzar of Babylon. He conquered the world and set up the Babylonian Empire, and when he came to Jerusalem the king of Judah tried to deceive him, and Nebuchadnezzar destroyed Jerusalem and took away those that were left as prisoners to the land of Babylon. They were taken to the land of idolatry, and this was God's plan, they want idols they got idols. God did some mighty miracles through the Jews that were captives in Babylon, and the promise was made by the prophet Jeremiah that they would only be there for 70 years. Isaiah the prophet also declared that a Persian ruler named Cyrus would give the decree for the Jews to come home and rebuild their temple. Babylon is also mentioned in the book of Revelation as a final false religious system that will spread throughout the whole world, and then Jesus will return.

The Land of Babylon. In ancient times the land of Babylonia was a plain located about 200 miles above the juncture of the Tigris and Euphrates Rivers. The two rivers flowed downward from the north and brought rich deposits and very fertile soil from the mountains. The northern border was Assyria and Mesopotamia, the east were the Zagros mountains of Elam, to the south was Chaldea, and to the west was the Syrian Desert.

The City of Babylon. When Nineveh fell in 612 BC Babylon became the capital of the Babylonian Empire. When King Nebuchadnezzar came to power he made Babylon one of the most marvelous cities in the history of the world. Isaiah called it the "glory of kingdoms" (Isaiah 13:19).

The Babylonian Empire. The kingdom of Babylon became the first world power in the history of the world. King Nebuchadnezzar was the mighty ruler who conquered cities and made Babylon powerful.

King Nebuchadnezzar. King Nebuchadnezzar was the most powerful ruler to come out of Babylon. He waged war against any country who would not submit to his authority. According to the Bible he built a statue of gold, which symbolized that his kingdom would never pass away. Later he learned who was the true King.

The Destruction of Jerusalem. In 586 BC the Babylonians came and conquered Jerusalem and destroyed the beautiful Temple of Solomon.

The Dragon of Marduk. Marduk was the chief god of ancient Babylon and his dragon could be seen in the procession way and on the Ishtar Gate as the Jews entered Babylon. The dragon is often seen with Marduk in monuments.

The Fall of Babylon. In 539 BC the Persian king Cyrus "the great" redirected the Euphrates River and marches armies in and conquered Babylon. The Bible records the Babylonian and the Persian rulers that existed during the time of Daniel, who was one of the Jewish captives.

The study of ancient Babylon is very important in the study of the Bible, let's pray:

Dear Jesus, we thank you for your word which declares that Babylon was a kingdom that defied you. We also thank you that through various circumstances you made your name great in Babylon and even to King Nebuchadnezzar. We praise you that you are mighty and powerful and we love you. In Jesus name? Amen!

The Land of Babylon for Little Kids

Map of the Land of Babylon for Bible Study